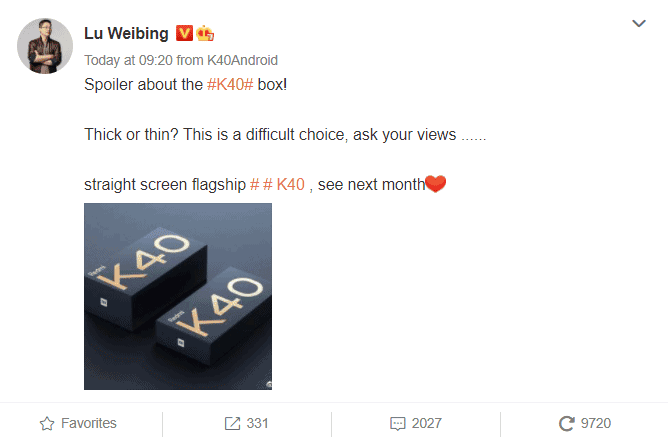 The trend in the smartphone industry lately is to take the charger out of the box. However, it seems that only the major manufacturers are following this trend at the moment. First off, it was the iPhone 12 series that took the charger out of the box. Then Xiaomi unveiled the Mi 11 without a charger in some markets. Like the Xiaomi Mi 11, the Samsung Galaxy S21 series also doesn’t have a charger in some markets. Now recent reports show that the Redmi K40 may not come with a charger in the box.

For the first time, we saw the packaging box of the Redmi K40. The image is from the company’s vice president and general manager Lu Weibing. According to his post on Weibo, there are two versions – one is thick and the other is thin. Looking at the pictures, the thick box probably contains a charger, unlike the thin box.

Lu Weibing said, â€œThick or thin? It is a difficult choice. Ask everyone for your opinionâ€¦ We know that Xiaomi Mi 11 has launched two versions of packaging, one to send the charger (gallium nitride charger), the other not, and the price of both is the same , so I guess Redmi K40 can also adopt this solution â€.

It seems that Redmi is seeking the advice of buyers. It is also possible that Redmi adopts both versions for different markets. For now, we absolutely cannot say if the Redmi K40 will not come with a charger.

From speculation so far, the Redmi K40 will come with the Snapdragon 888 SoC. The official starting price for this smartphone is 2,999 yuan ($ 463) and it will also come with a 4,000mAh battery. There is no information on the fast charge capability at this time. According to reports, the Redmi K40 display will be an OLED display made of luminescent Samsung E4 materials, which supports a high refresh rate of 120Hz. This phone will also use LPDDR5 memory and UFS 3.1 flash memory.

Regarding the Redmi Note 10, Lu Weibing also had information for Internet users. He revealed that the Redmi Note 10 is coming soon. Sadly, â€œto comeâ€ is all he had to reveal. Obviously, this is not enough for enthusiasts who are impatiently awaiting this device. From the current trend, the Redmi Note 10 may also not have a charger in the box.