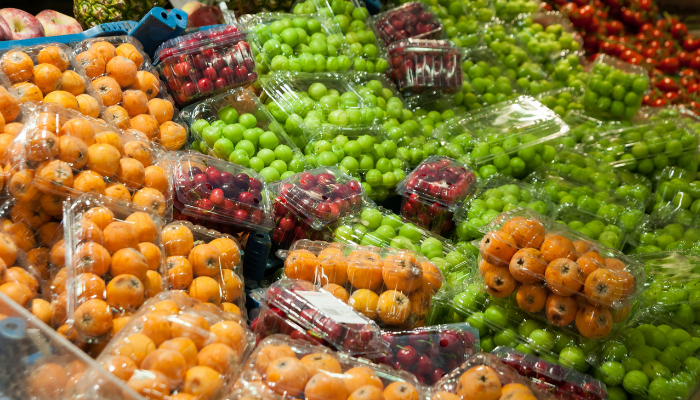 The problem with food packaging

The problem with food packaging starts from the moment it is created. Each form uses a lot of resources like energy, water, chemicals, petroleum, minerals, wood and fibers to produce.

Its manufacture often generates atmospheric emissions, including greenhouse gases, heavy metals and particles, as well as wastewater and / or sludge containing toxic contaminants.

Manufacture of paper or cardboard

The paper and board industry uses wood which is ground into pulp using mechanical or chemical processes and the manufacturing process can generate emissions to air and water.

In the United States, the main source of raw materials for the production of plastics is natural gas, derived from either the processing of natural gas or the refining of crude oil.

There are seven types of plastic polymers that account for 70 percent of all plastic production, including polypropylene, polystyrene, polyvinyl chloride, polyethylene terephthalate, and polyethylene, all derived from fossil fuels and used in food packaging.

The manufacturing of plastics is responsible for a significant amount of greenhouse gas emissions in the United States, up to one percent. Other air emissions from the production of plastics include nitrous oxides, hydrofluorocarbons, perfluorocarbons, and sulfur hexafluoride.

After use, most packaging is discarded and either landfilled or becomes waste which is carried by wind and water currents into the environment.

Packaging sent to landfill, especially when made from plastic, does not degrade quickly or, in some cases, not at all, and chemicals in packaging materials, including inks and dyes labeling, can enter groundwater and soil.

Waste, especially plastic, often goes to the most remote areas of the planet, where it threatens human, bird and marine life. In the oceans, the problem has become so acute that the chief of the oceans of the United Nations has declared that the plastic pollution of our oceans is a “planetary crisis”.

The serious impacts of plastic on the environment are not limited to ocean pollution, however, one study estimated that a third of all plastics discarded end up in the soil or in freshwater.

Some scientists believe that microplastic pollution (plastics smaller than five millimeters) in soils around the world is an even more serious problem than microplastic plastic pollution in our oceans – about four to 23 times worse, depending on the environment. Microplastics in soil have a number of adverse effects, including impacting the behavior of soil fauna such as earthworms and disease transport.

Once in the ground and in waterways, degrading plastics absorb toxic chemicals like PCBs and pesticides.